Announcing the winners in our essay competition!

After reviewing hundreds of submissions from around the world, we are happy to announce our six winning original essays from the 2016 “What’s Next?” essay contest.

We greatly appreciate the efforts of everyone who challenged themselves to think boldly and propose genuine alternatives to the present system by participating in this competition. We received hundreds of submissions from 30 different states and 26 countries, proving that many around the world not only believe system change is necessary, but have thought long and hard about what a new system should look like and how we might get there.

With the help of the eminent activists and scholars that served as our top judges – Naomi Klein, Raj Patel, and Dayna Cunningham – we were able to narrow this field down to six winners, but it was far from easy! We want to acknowledge the thoughtful, intriguing, original, and valuable ideas presented in each of the essays submitted. You fill us with hope that another world is not only possible, but that together we can build it. As we are able we intend to work through the essays we received to identify ways to highlight the best ideas and proposals they contain – something we will do in cooperation with the authors.

In “From Perception to Participation,” University of Pittsburgh senior Raghav Sharma presents his vision of a next system – a system grounded in democratic confederalism. Looking back to two critical years (1648, which was predominantly concerned with state sovereignty, and 1848, when liberal democracy was on the rise), Sharma builds the case for reaching a renewed version of democracy by 2048—one built on participation and deliberative structures. Through the democratization of key spheres of social life (family, education, and workplace) and the creation of truly deliberative structures such as general assemblies, people will be brought “into the process of crafting a collective existence through individual expression,” Sharma writes. As he concludes, “the war against authoritarianism today can only be won with a renewed vision of democracy for the world of tomorrow.”

Judge Raj Patel says “Asking questions about The Next System means being unafraid to take on tough questions, like what do households look like?, or how will communities defend themselves and keep their own order? This essay draws on systems from around the world, and will have you thinking long afterward about what your answers might be.” 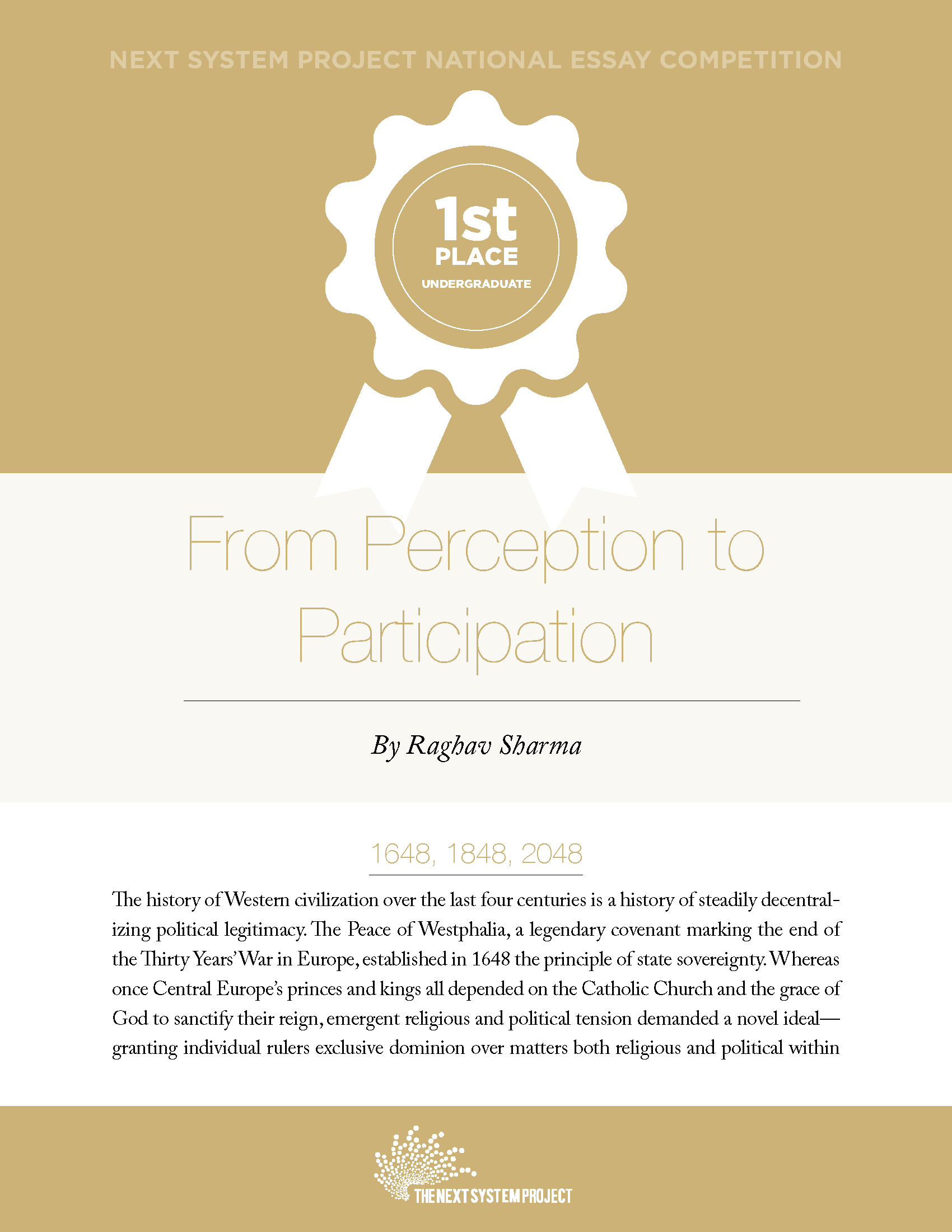 “Locke, Marx, and Two Theories of Labor: A Philosophical Essay on How to Fix Our Political Economy” is an “Excellent philosophical essay taking on key mechanisms of economic and social exploitation at their philosophical roots and proposing a strong and precise alternative,” according to judge Dayna Cunningham.

In the essay, West Chester University of Pennsylvania graduate student Charles M. Rupert analyzes the theories of labor of Locke and Marx to argue the case for a new system based on private property and market exchange that is also compatible with a non-exploitative and balanced commercial order. To achieve this “new dream,” Rupert examines the true value of labor and proposes four solutions to address current deteriorating economic trends: abolition of rent, adoption of consumer loans only (something similar to a non-equity crowdfunding, communal investment), creation of a proprietary enterprise system (or labor-owned enterprises), and the establishment of a guaranteed income. As Rupert writes, these may not solve all of our problems but “may lead to a system that not only works but is also just.” 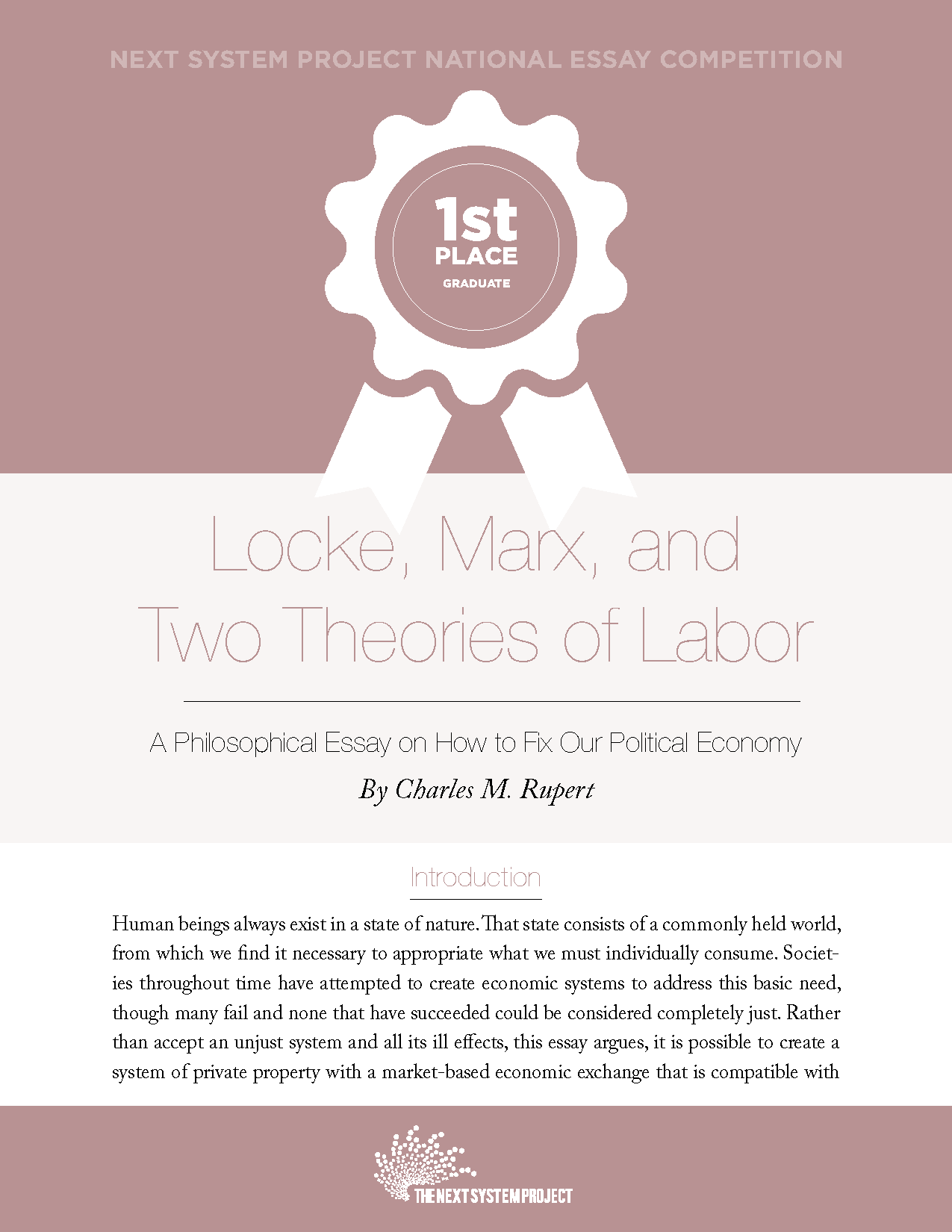 In “Community, Democracy, and Mutual Aid: Toward Dual Power and Beyond”, writers and organizers John Michael Colón, Mason Herson-Hord, Katie S. Horvath, Dayton Martindale, and Matthew Porges outline a bottom-up strategy to achieve a libertarian eco-socialist society, starting in a single city and expanding to a global scale. Grounded in principles of direct participation, social ownership, equality, commoning, and community restoration, the authors propose developing communal institutions of democratic, collaborative governance and self-sufficiency, including the creation of common funds and cooperatives, to build dual power and transform the political landscape. Using Detroit, Michigan as a case study, the authors outline a set of democratic cooperative institutions to be adopted in the area, including community land trusts, collective housing, social services, urban agriculture networks, community-owned energy, and neighborhood councils. As the authors state, “a better future is ours for the taking.”

This essay stood out, Naomi Klein said, because it “sketches out a flexible roadmap for scaling up participatory democracy, in a creative synthesis of a number of different strands of radical thought.” 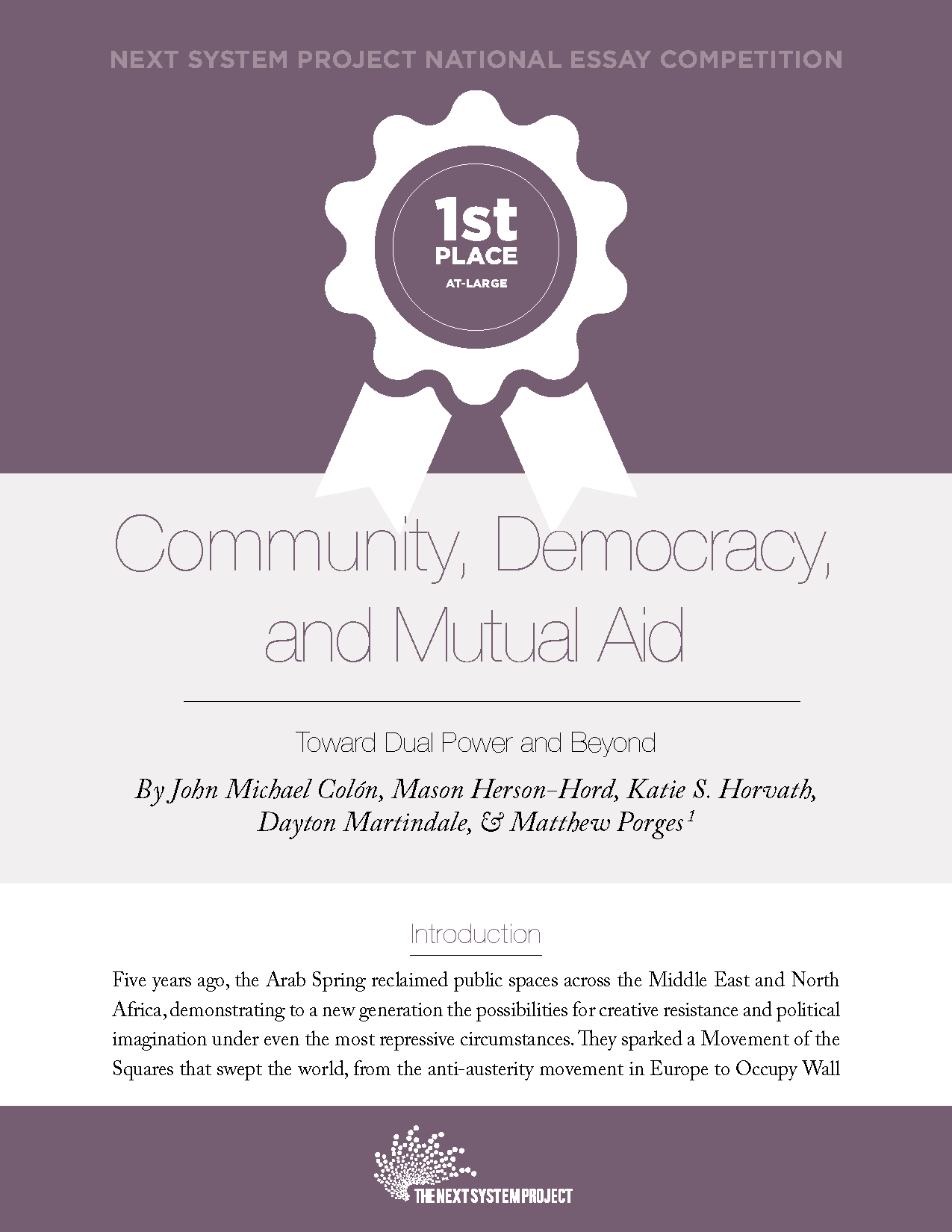 In “New Visions: Society Reimagined”, University of San Diego senior student Melissa A. Padilla presents a new vision of state and world order premised on the values of fairness, substantive equality, justice, and empathy. By reviving the principles around moral theory and political obligations, Padilla envisions the creation of political and socio-economic institutions to uphold society’s new values. In particular, Padilla advocates for the adoption of a non-partisan hybrid direct and representative parliamentary democracy, a democratic market socialist economy, and a cosmopolitan system (through the restructuring of international institutions) to ensure social justice. “It is thus our time to be the architects of a new society and create a world that serves all,” concludes Padilla. 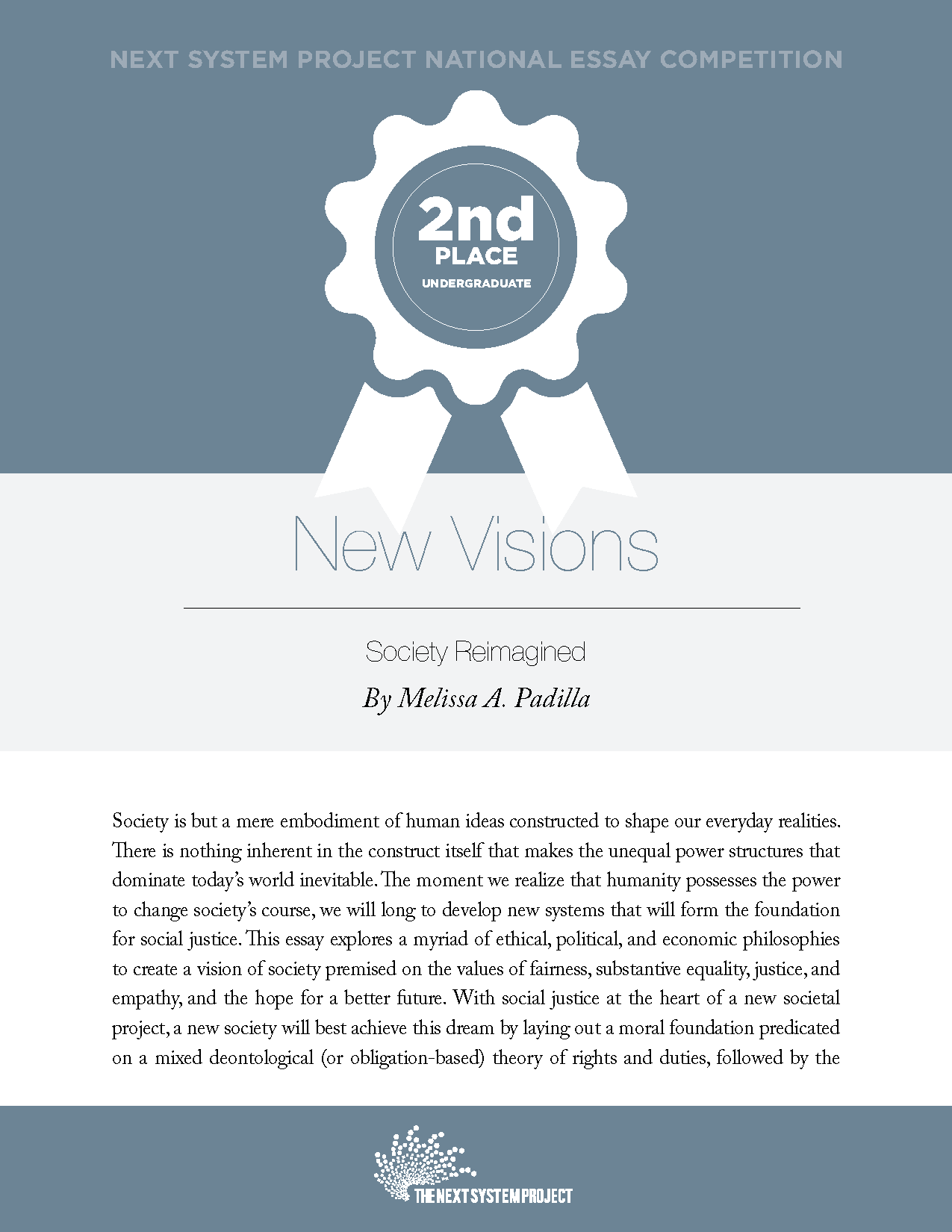 “Everyday Movement Against Capitalism: Prospects for a Prefigurative Strategy toward Open Utopia” is a “highly creative and provocative essay that looks at Marx’s ideas about alienation and connects the idea of an open utopia to a current day movement-building approach,” according to judge Dayna Cunningham.

In the essay, Oregon State University graduate student Alexander Riccio looks at both strategy and prefigurative perspectives to seek the cure of the problems underlying society today – specifically oppression, domination, and alienation. He then calls for an open exercise of radical imagination as the means to reveal and create “open utopias” rather than the highly prescriptive utopias of Marxism and other Left projects which can undermine human agency. As a starting point, Riccio proposes the cultivation of “spaces of revolutionary (re)production where permanent land and residences are available for social reproduction in all radical cultural and democratic activities.” Examples provided include the creation of community land trusts tied to cooperative businesses, and referendums oriented toward establishing present-day commons. 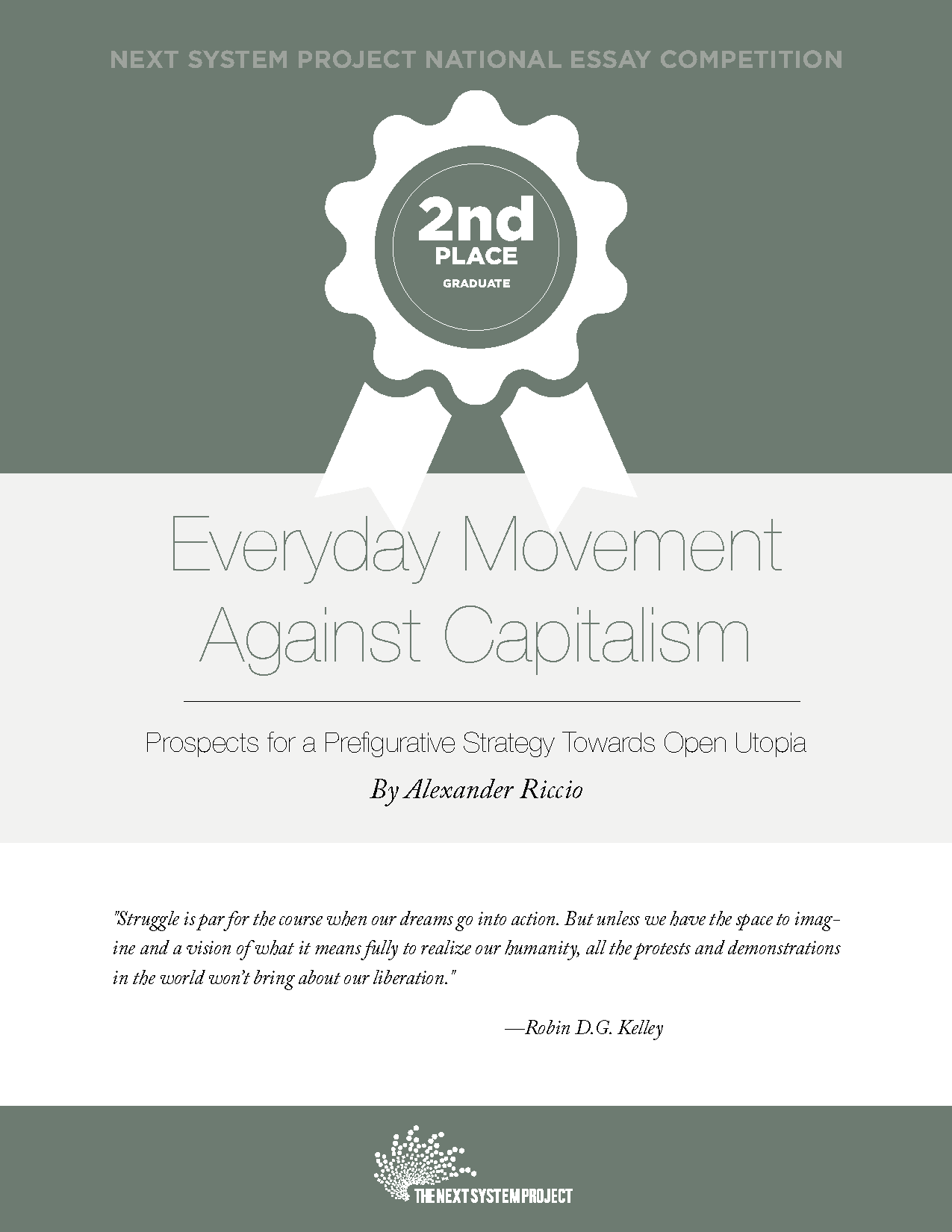 Essay contest judge Naomi Klein described his essay as “an impressive conceptual map of where the building blocks for the next system are already emerging.” 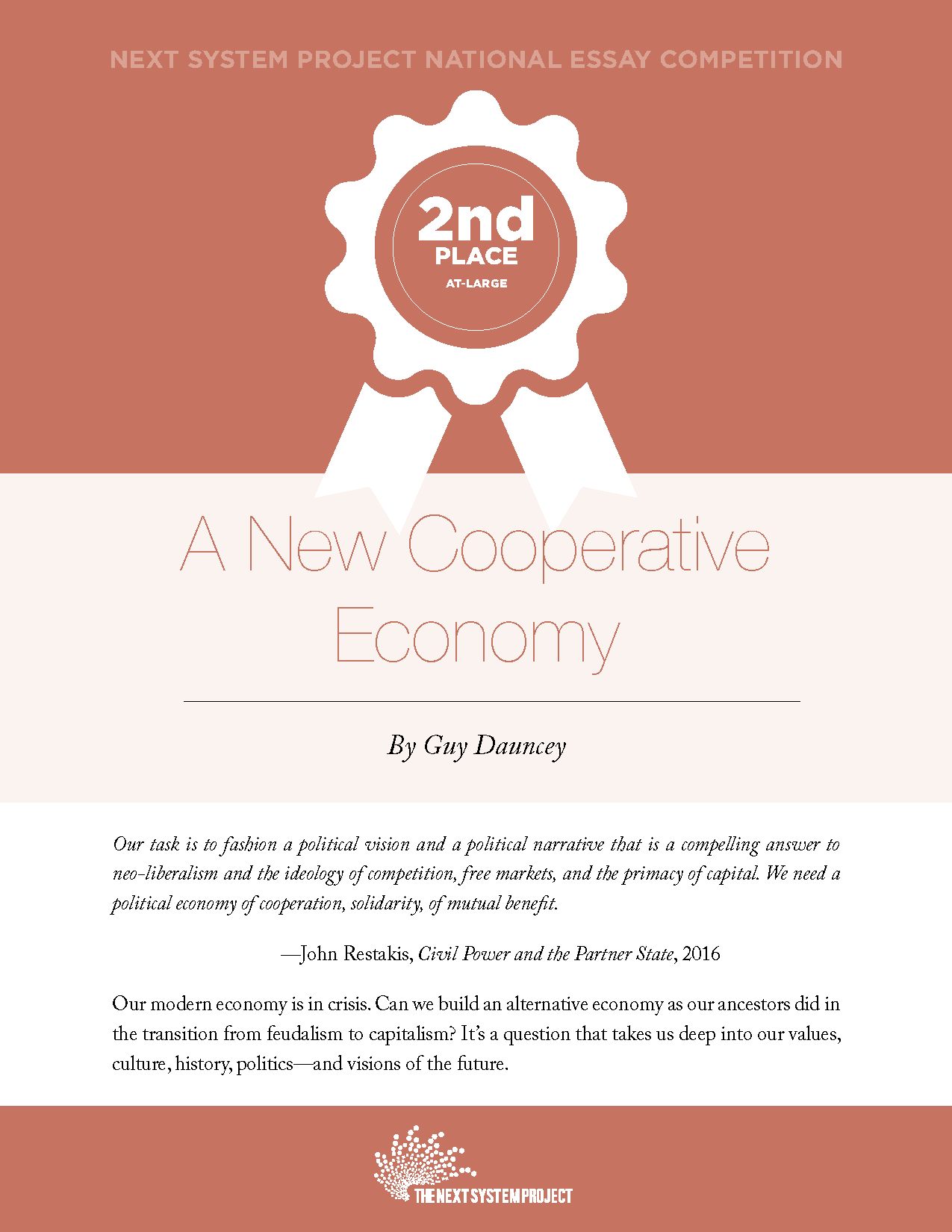 Note: The essays were made anonymous and evaluated by our panel of judges based on a set of criteria, including content (and ability to address cross-sector issues), creativity, thoughtfulness, persuasiveness, clarity of arguments, organizational structure, and rationale. Finally, of course, the opinions expressed in the essays reflect the views of their authors and should not be attributed to the Next System Project.