The Plan For A National Homes Guarantee

Everyone living in the United States should have safe, accessible, sustainable, and permanently affordable housing: a Homes Guarantee. People’s Action, with the assistance of Democracy Collaborative policy associate Peter Gowan, has published a 20-page report outlining a bold plan to address the nation’s housing crisis.

Right now, our country falls woefully short of delivering on this promise. The federal government has not made a large scale investment to address affordable housing shortages since Franklin D. Roosevelt’s New Deal, which created public housing for civilians. Now, we need action beyond that scale. The country’s housing crisis is untenable, and it must end. We need a Homes Guarantee that will:

Get the full report at HomesGuarantee.com.

Read Peter Gowan’s commentary in Jacobin: “This fight is a crucial one in building a multiracial working-class coalition capable of challenging those who hoard land and capital for themselves.”

Fully realized, this proposal will guarantee homes for all. Rents will be set based on tenants’ needs and real costs to local government, rather than speculative market prices. Land will be stewarded by and on behalf of everyday people instead of financialized by developers and landlords. A Homes Guarantee will offer both reparative and proactive approaches, including restorative justice to communities impacted by decades of discriminatory housing policy, as well as investments that slash carbon emissions and support resiliency from ongoing climate breakdown.

In a poll done in early 2019 by YouGov for The Democracy Collaborative, 55% of respondents said they would support a program of new, publicly built affordable housing. Respondents also favored by 48% (compared to 22% opposed) local governmens creating affordable housing, including with such tools as dedicated land trusts to counter speculation and gentrification. 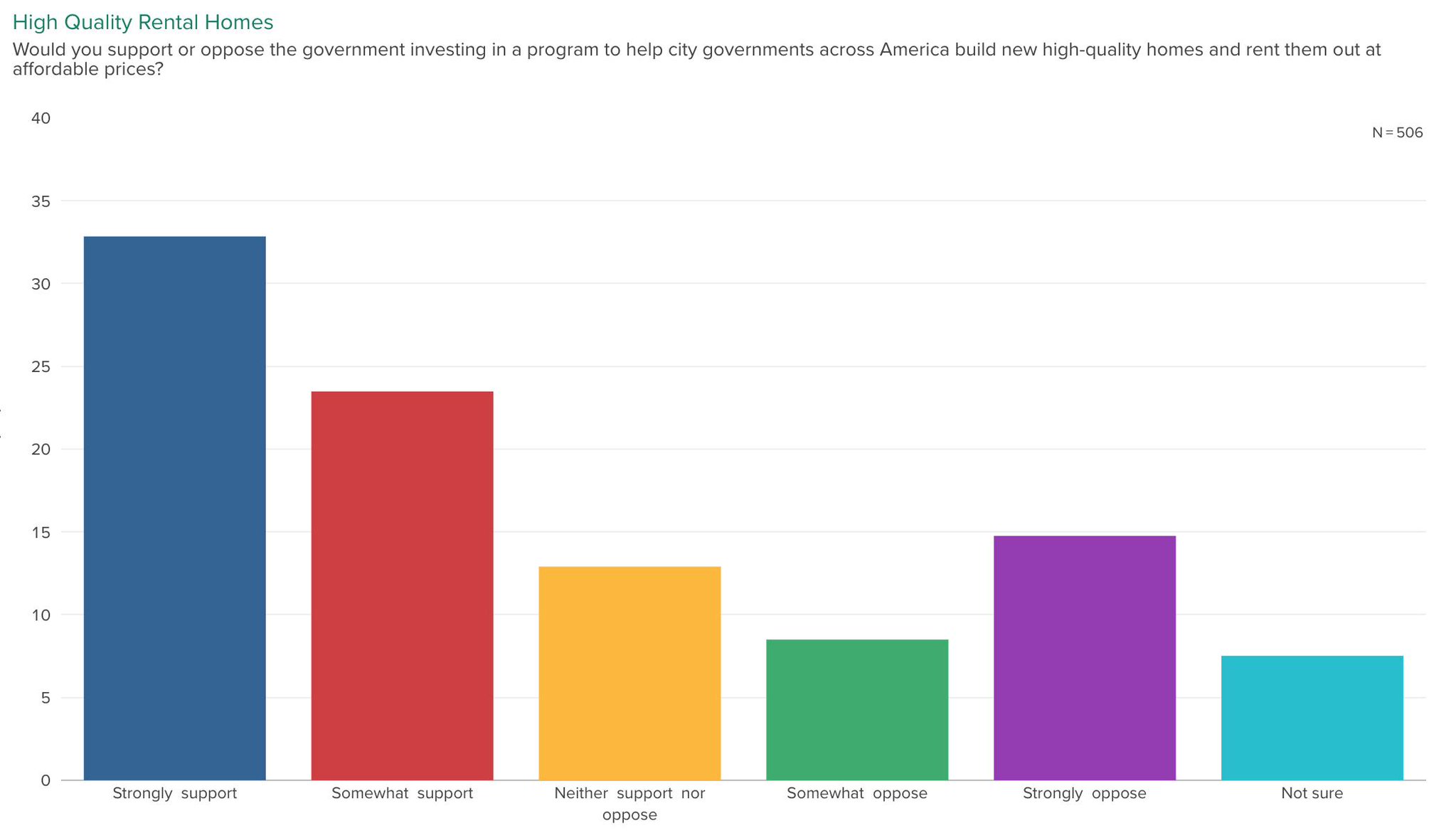 “Everyone has the right to a home”

Social housing is a public option for housing. Typically, it is rental housing provided below market rates. Rents are charged according to either real costs-based or income-based formulas. Social housing is permanently off the private market: in some cases, it can be owned and operated by municipal governments or nonprofit housing providers. In other cases, as with limited-equity cooperatives, land trusts or mutual housing associations, residents may own a stake in their homes at subsidized rates, and they cannot sell them for exorbitant profit. Models for social housing exist in several other countries and can serve as a basis for designing an American program.

Social housing is based on the fundamental principle that everyone — no matter their income, background, or their conformity to social or legal norms — has the right to a home. Social homes should be affordable and accessible to people at a variety of income levels: middle-income, low-income, very low-income (VLI), and extremely low-income (ELI) households. It must be affordable and accessible to people currently experiencing homelessness.

In addition, a Homes Guarantee requires a recommitment to public housing, beginning with repealing the Faircloth Amendment, which prohibits new public housing construction, as well as a multi-billion dollar reinvestment in public housing where it currently exists. Congress should start with at least $30 billion annually for the next five years, or $150 billion in total. The investment should initially go toward clearing the current backlog in repairs, and then toward a major renovation and capital improvement program that includes investments in basic infrastructure, accessibility, weatherization, and climate resiliency.

A federal Homes Guarantee means that every household in the United States — whether they rent or own — has a dignified and affordable home. Today, both renters and owners are subject to the instability of unregulated and predatory industries that cause evictions, displacement, and foreclosure. A fully realized Homes Guarantee balances the power between people who own buildings and those who live in them.

The United States has never addressed the brutality of Native genocide and removal, and slavery, and their enduring legacies; our housing and land ownership systems remain deeply racialized. A Homes Guarantee on its own is not enough to establish equal footing among households that have been impacted by this legacy. Even so, a Homes Guarantee must make every effort to repair the racist ground on which current housing policy stands, and to provide a measure of redress for the physical and economic violence that our government and private actors have perpetuated through the housing market. The government has enacted a handful of tepid policy responses to mitigate poverty, but none have directly confronted the racialized nature of wealth generation, nor the barriers people and families of color have faced in securing a safe, decent place to live. A Homes Guarantee must be an opportunity to provide a degree of restorative justice, accounting for race-based violence in the form of stolen land and wealth.

As long as speculation of land and real estate is commonplace, and housing is commodified, the housing and rental markets will continue to be unstable and predatory. A Homes Guarantee must end land and real estate speculation. Congress should investigate the practices of speculators across the country, including big and small corporate entities that shield owners from accountability to tenants, municipalities, and federal regulators. The government must also institute taxes to deincentivize speculation and its negative community impacts.

People’s Action is a Chicago-based grassroots organizing network with a long track record of fighting for housing and other economic justice reforms. Gowan was part of a team of people who collaborated on the report. Gowan led the drafting of the report’s social and public housing sections.