Out of Time: The case for nationalizing the fossil fuel industry

Manager, Climate and Energy Program at The Democracy Collaborative more

For decades, scientists have been predicting catastrophic levels of global heating if society does not change course. The relatively simple models that were in play when Dr. James Hansen first testified to the U.S. Congress in 1988, warning members that global heating posed a serious threat, have proven to be remarkably accurate.1 More than 30 years later, the stock of carbon dioxide (CO2) in the atmosphere continues to skyrocket.2 American companies show no signs of limiting CO2 emissions anytime soon; in fact, they are currently planning to extract record levels of reserves buried underground.3

What is to be done in the limited time we have left? How does society put itself on a different path that will stabilize temperatures for generations to come? Groups like the Sunrise Movement have moved mountains in the past two years by increasing public awareness about the climate emergency and helping develop and popularize bold ideas like the Green New Deal.4 Building the green economy is going to require monumental action, including investments to create unionized living-wage jobs and better people’s lives through improved public services, air quality, and a thriving economy.

But in this paper we want to think about the other side of the equation: the dirty side.

The dirty side of the climate equation refers to the fossil fuels industry that is polluting our waterways, our air, our planet, and our bodies. Given the stage of the crisis we are in, one thing is clear: the fossil fuel economy must be rapidly phased out. Scientists have repeatedly pointed this out, noting that decades of inaction have made the challenge that much harder. Due to inaction, we have four times the work to do to decarbonize the planet and dwindling time to do it in.5 Despite the enormous stakes, viable pathways to quickly wind down the fossil fuel industry are less clear. Moreover, the idea of a managed decline of the industry has received little to no media or policy attention, though this is beginning to change with the collapse of oil prices. As much as some would like to believe that the fossil fuel industry can lead the energy transition, their actions—past and present—prove this is a dangerous pipedream. Fossil fuel executives have known about global warming and the role their firms play in the impending catastrophe for close to half a century.6 Rather than diversifying their businesses and investing in the green energy of the future, they have decided to double down, extract more, and intentionally lie to the public in order to sow seeds of doubt in what they themselves knew, and continue to know, to be the truth; all with the end goal of maximizing power and short-term profits through a continued harmful business as usual model.7 In part, they are constrained by their own carbon lock-in: even if fossil fuel companies wanted to pivot their operations, their heavy investments in fossil fuel reserves, extraction, and transport means that they need to keep extracting and selling to the market for decades to come to recoup the costs of the capital-intensive infrastructure.8   Even now, with growing climate impacts across the world and a groundswell of climate activism, Shell’s chief economist summarizes their current thinking as follows: “we’re going to get as much out of [oil and gas] for as long as we can.”.9

This brings us back to our earlier question: what is to be done? Specifically, how can fossil fuel industries be rapidly wound down given the scale of the climate problem, the extremely short timeline we have to decarbonize, and the fossil fuel companies’ carbon lock-in? Importantly, this is not just a debate unfolding amongst climate activists. Financial elites including Mark Carney, Jim Cramer, and Larry Fink are sounding the alarm too.10

Any dismantling of industry has to consider how to support its workers. Looking at direct and indirect jobs across the coal, oil, and gas industries indicates how challenging a large-scale decline of fossil fuels will likely be. By the end of 2018, the gas, coal and oil industries account for over 1.6 million U.S. workers (See Figure 1). The fossil fuel industry has shown no signs that it is willing to put in place proactive measures for transition, putting at risk employees and the communities they live in. In fact, the decline of the coal industry has shown that companies are willing to shed their responsibility to workers.

A federal takeover can start to meaningfully address the climate emergency and remove fossil fuel interests from the political equation.

Many economists argue that we just need a carbon price and the wonders of the market will work it all out.11 We will address this misplaced overconfidence in the market in this report. Others offer that renewables will rapidly be able to push fossil fuels out of the market as cheaper sources of power. Some activists, on the other hand, have been fighting to #KeepItInTheGround by pushing for supply-side policy interventions that would halt the extraction of fossil fuel resources.12 Presidential candidates for the 2020 Democratic primary have focused on executive orders to limit extraction on public lands, fracking bans, and reinstating the U.S. crude export ban—a measure that in itself could reduce global emissions by the equivalent of closing between 19 and 42 coal plants.13 But eliminating the dirty industries will require much more than that; it demands that the U.S. halt existing and already producing fields and transition the economy beyond fossil fuels in a controlled fashion. There is no single silver bullet to ensure this happens. Instead, we will need a large swath of policy changes to transition the economy. Markets, for their part, are incapable of managing such a sizable transition, particularly since they’ve been manipulated in the industry’s favor through things like subsidies and bailouts. A transition will be fought tooth and nail by existing fossil capital. And importantly, phasing out fossil fuels requires a plan, which the country sorely lacks at this time.

The time has come for the U.S. government to nationalize the fossil fuel industry. With oil prices collapsing, and even going negative, and firms’ market values plunging, the government can once again use a policy weapon that has in the past been successful in overcoming social and economic unrest: nationalization. A federal takeover can start to meaningfully address the climate emergency and remove fossil fuel interests from the political equation—for a cheap price, too. While a few years ago taking over just the top 25 oil, gas, and coal companies would have required over $1.15 trillion, today a takeover could cost just $550–$700 billion (or half of that if the Fed were to acquire only majority control—51 percent—of companies). That’s a small price to pay to neutralize fossil fuel industry power once and for all.

Nationalization alone will not solve the crisis, but it’s a crucial tool to consider as we engage in a program of crash decarbonization, particularly in ways that protect workers and communities dependent on extraction. This is especially true given current macroeconomic conditions (specifically the economic collapse due to the COVID-19 outbreak and the collapse of international oil prices), where fossil capital has been rapidly devalued and government debt is as cheap as it has ever been. With a habitable planet at stake, nationalization is an eminently reasonable policy to undertake. 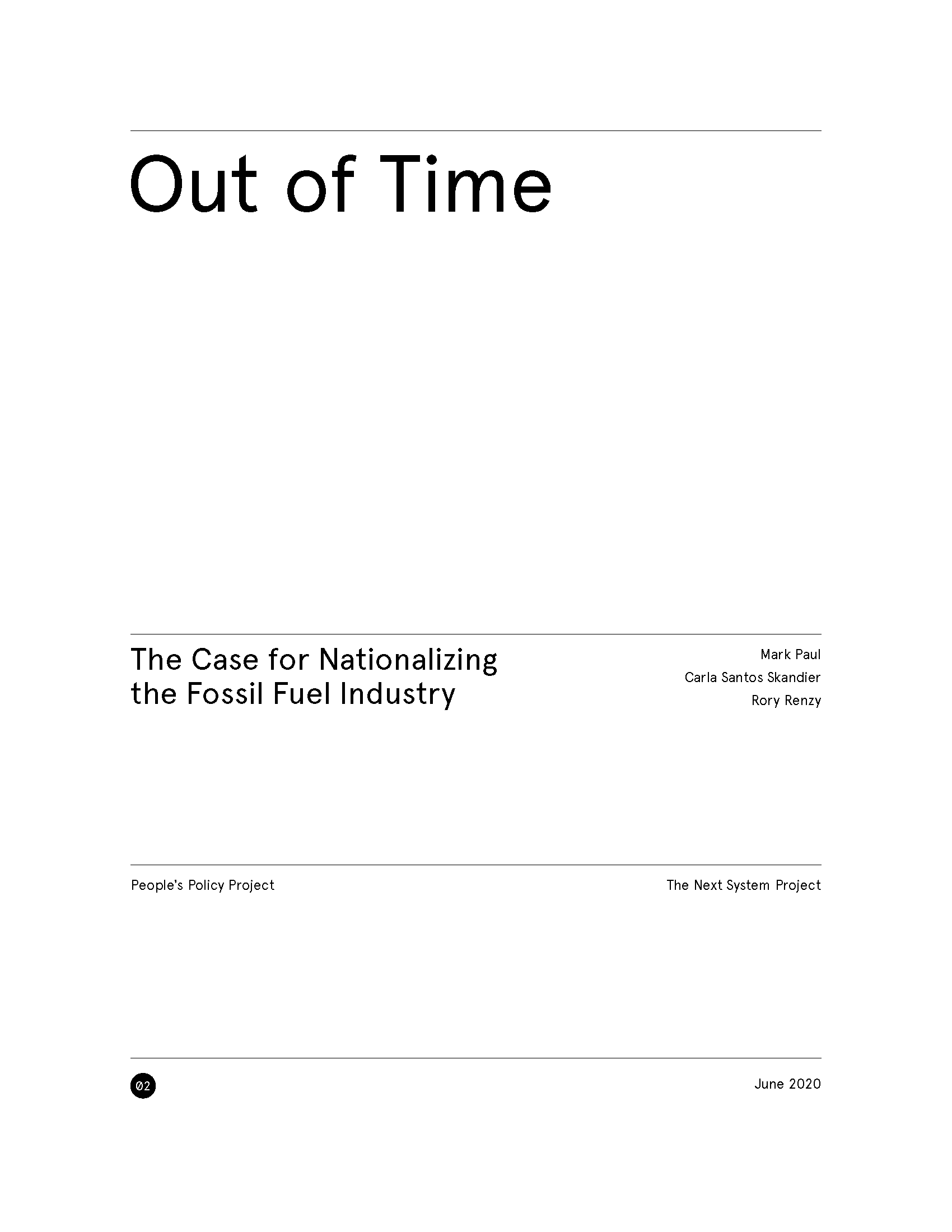 Out of Time [PDF]

Manager, Climate and Energy Program at The Democracy Collaborative more